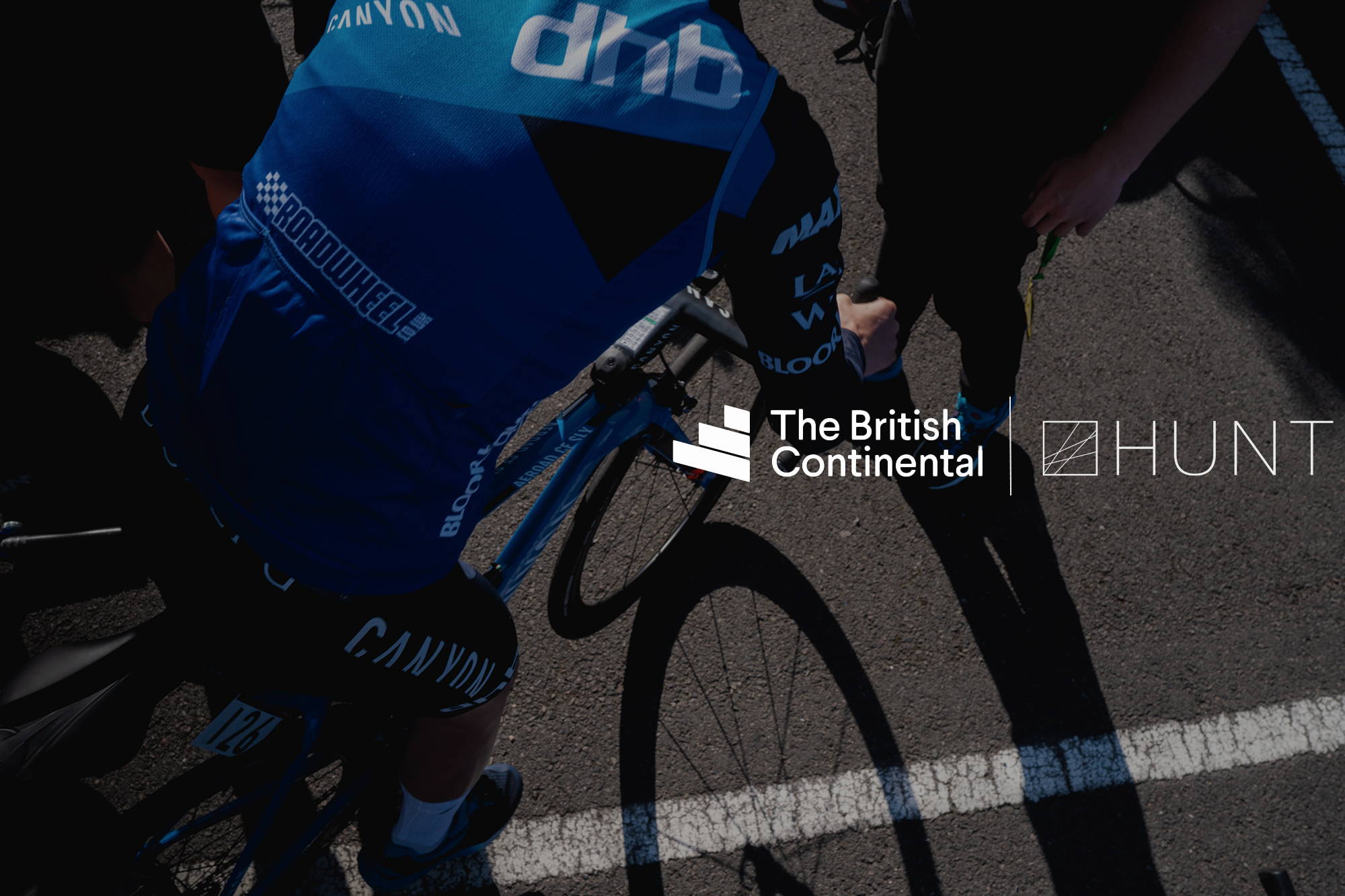 This is the first in a series of guest posts from Denny Gray (Founder & Editor of The British Continental) offering a unique insight into the domestic racing scene in the UK. With a relevance and popularity that belies its age, The British Continental provides in-depth coverage and analysis from the British racing scene, as well as providing a platform for those involved in the community to help change the domestic sport for the better.

With the Tour Series set to return for the first time since May 2019, this explainer tells you what it is, how it works, when it takes place and why it’s oh-so-important for our domestic racing teams

An annual series of circuit races, held predominantly in city and town centres. One of the defining features of the series is its emphasis on team success over individual achievement. The team who consistently performs the best and scores the highest combined points tally claim the prestigious Tour Series title.

The Series consistently attracts the top teams from across the UK and this year will be no different, with British UCI Continental teams going head-to-head with the UK’s top elite squads. Canyon dhb SunGod and CAMS-Basso Bikes were crowned the most recent champions back in 2019 and will be back to defend their titles.

Highlights of the series will once again be shown on ITV4. And, in a new innovation, a partnership with USA CRITS will see the winning teams from the men’s and women’s Series invited to compete in the American criterium series’ finals weekend at the Winston-Salem Cycling Classic in North Carolina in September (24th-26th).

Originally due to take place in its traditional slot in May, this year’s edition was postponed to August because of Covid restrictions. 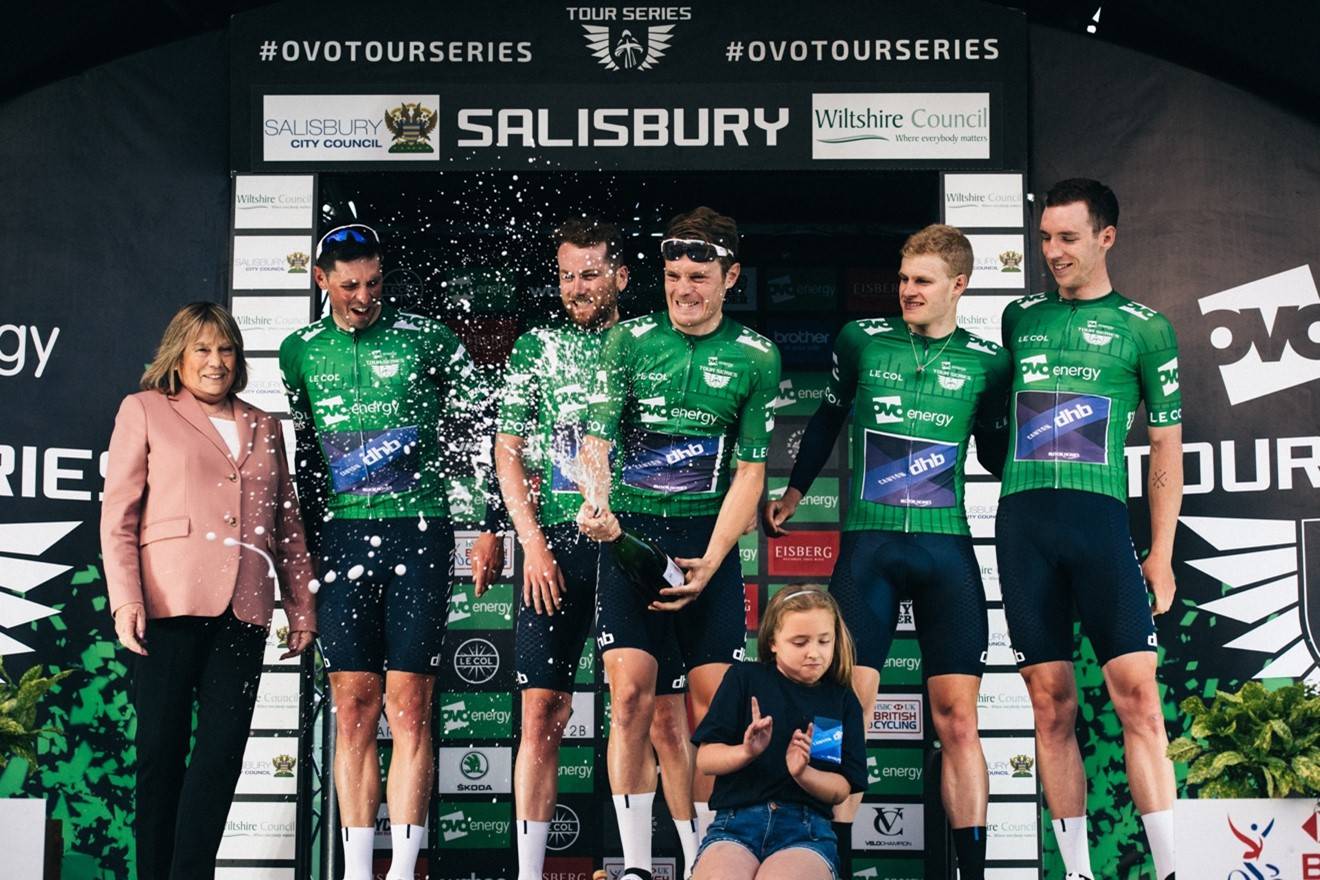 Canyon dhb p/b Bloor Homes celebrate the win at the Salisbury round of the 2019 Tour Series. Photo: David Hares

The rearranged Series is a compact affair, involving three rounds set in the north of England and south Scotland, running from Sunday 8 August through to Thursday 12 August.

The opening round will take place in Guisborough, home of the East Cleveland Klondike GP. Sunderland will host the second round, with a final round across the border in Castle Douglas, Dumfries and Galloway, as The British Continental had trailed last October.

Why is it important?

The Tour Series is always a fiercely contested affair, but after a season and a half without any top-level domestic road racing in the UK, it takes on particular importance for domestic teams this year.

With ITV4 showing highlights of each round, it is one of very few domestic road racing events that will be shown free-to-air, providing vital exposure for teams on their sponsors.

And with the UK emerging from the Covid-19 pandemic, the events themselves will provide a rare opportunity for local communities to come together to celebrate sport on their doorsteps. 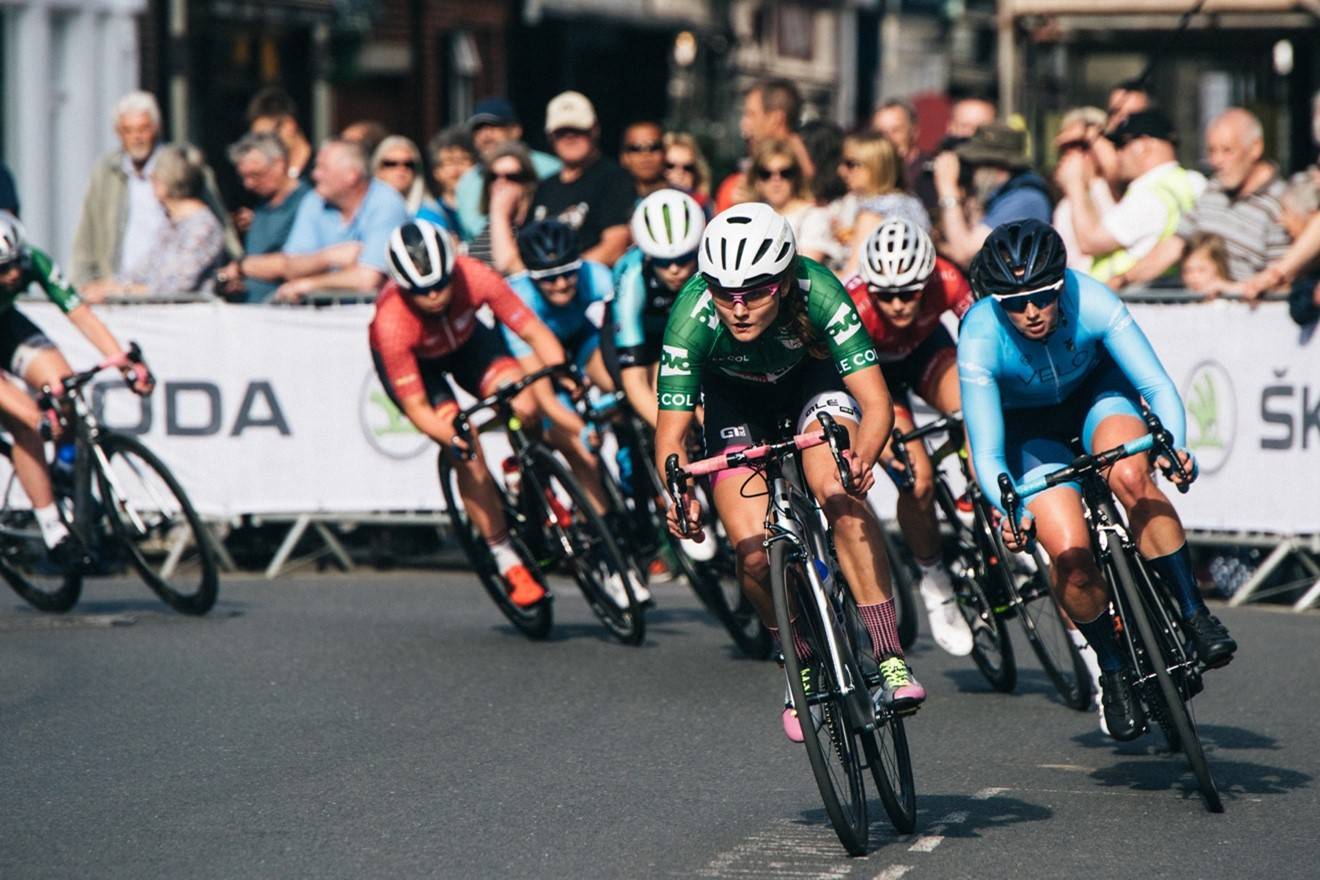 The women’s race at Salisbury round of the 2019 Tour Series. Photo: David Hares

Canyon dhb p/b SunGod are the defending men’s champions; they won their second title in 2019 and victory this August will make them the first men’s team to win three-consecutive championships.

CAMS-Basso Bikes are the defending women’s champions, having won last time out under the guise of Brother UK-Tifosi p/b OnForm.

Normally our gaze is firmly focused on individual riders to watch, but here it’s all about team strength as much as individual flair. 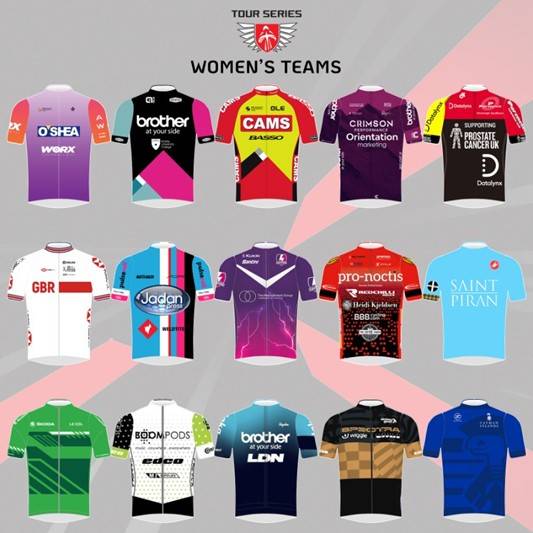 The compact Great Britain U23 team might be only have a five-rider squad but each member is extremely strong. They include three of U23s riders to watch this season: Otley GP winner Eluned King, Women’s CiCLE Classic victor Abi Smith and Amelia Sharpe. Halesowen Road Race winner Ella Barnwell and Sophie Lewis round out the strong quintet.

If these two teams are the favourites on paper, there are plenty of other challengers. The new Pro-Noctis-Redchilli Bikes-Heidi Kjeldsen team looked impressive in the recent National Circuit Series, the highest-placing elite team in the competition, finishing third overall. They count former CAMS-Basso Bikes riders Jo Tindley and Jenny Powell in their squad, as well as Corinne Side and Charliiy Berry, both consistent criterium performers.

This list isn’t comprehensive and there are teams and riders than can – and undoubtedly will – shine too. Isabell Darvill (Team Boompods), Hannah Bayes (AWOL O’Shea), Lucy Lee (Team LDN-Brother UK) and Frankie Hall (Loughborough Lightning – TRG) have all shown form in criterium racing this year, for example. And it will be fascinating to see how Irish track star Emily Kay (Torelli Assure Cayman Islands Scimitar), fresh from Tokyo. 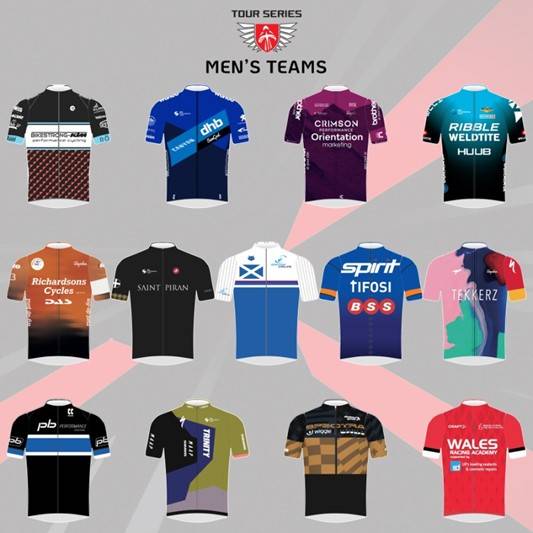 The team competition is likely to be a straight fight between defending champions, the HUNT-backed Canyon dhb SunGod team, and heavyweight challengers Ribble Weldtite Pro Cycling.

Canyon dhb SunGod didn’t have it all their own way in the National Circuit Series. Ribble Weldtite Pro Cycling were impressive in the Otley GP in particular, winning the race thanks to sprint specialist Matt Gibson, a former national circuit championships winner. He’s supported by a squad full of criterium knowhow, including Freddie Scheske, Charles Page and Cameron Jeffers. New signing Theo Obholzer could be a dark horse too.

Crimson Orientation Marketing RT were the outstanding elite team in the National Circuit Series and we expect them to acquit themselves well in the Tour Series too, especially with reigning national circuit champion Joey Walker in their squad.

Development squad TRINITY Racing bring a mix of young talents and some older guest riders. First-year under-23 American Luke Lamperti has already won a UCI road race this year, fast-finishing Brit Ollie Rees has been in great recent form in domestic races and Aussie Blake Quick arrives with a palmares full of top UCI road race results in Asia. They should be in the mix.

The other UCI Continental team, Saint Piran, shouldn’t be discounted either. They include former Tour Series round winners Steve Lampier and Jacob Hennessy, as well as Tom Mazzone, who finished 7th in the recent GP de Pérenchies in France.

TEKKERZ CC are an exciting proposition. As well as an eye-catching new kit, they also bring a squad of riders capable of causing upsets. Captained by crit specialist Alec Briggs, they include former Felix English and Jon Mould, who have multiple Tour Series wins between them. One of our U23 riders to watch, Jacob Vaughan, guests for them too.

As with the women’s competition, there are plenty of teams and riders to watch beyond the main favourites. Spirit Bontrager BSS Rotor are another strong elite squad, Matt King (Team PB Performance) has been in recent good form, as has Finn Crockett (Scotland) and former Vitus Pro Cycling rider Mikey Mottram (Team Spectra p/b Wiggle) can perform well on circuits like these.

See the full list of teams and provisional squads here.

There’s nothing like getting down to the venue itself and watching the riders race by from the roadside, preferably with a nice cold drink on a warm summer’s night as dusk descends*.

But, if that’s not possible, highlights will be shown on ITV4 the evening after each round, as follows:

Highlights will also be available to watch on the GCN Race Pass. And short highlights clips from each round will be on the Tour Series’ YouTube channel and Facebook page too.

*Warning. It does occasionally rain in the UK.

There’s nothing like getting down to the venue itself and watching the riders race by from the roadside, preferably with a nice cold drink on a warm summer’s night as dusk descends*.

But, if that’s not possible, highlights will be shown on ITV4 the evening after each round, as follows:

Highlights will also be available to watch on the GCN Race Pass. And short highlights clips from each round will be on the Tour Series’ YouTube channel and Facebook page too.

*Warning. It does occasionally rain in the UK. 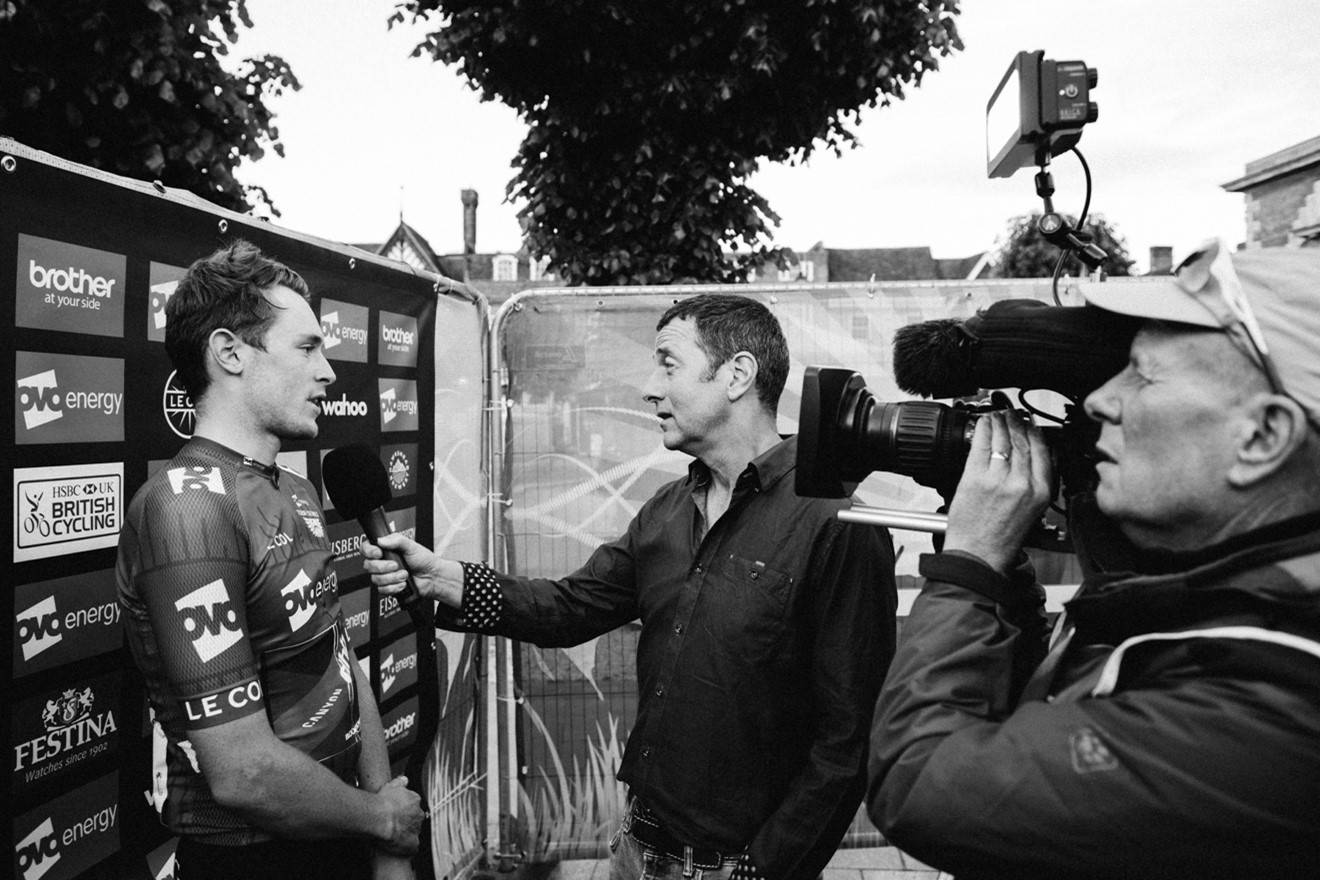 Rory Townsend is interviewed by Ned Boulting for ITV4 after the Salisbury round of the 2019 Tour Series. Photo: David Hares

Teams may enter a squad of up to eight riders, with no more than five riders being allowed to race in each round. To qualify for the team championship, men’s teams must enter five riders per round, while women’s teams must field a minimum of three riders.

Points will be awarded to teams on the following basis per round:

The team that accumulates the most points overall across all rounds will win the overall Tour Series.

A number of intermediate sprints will take place during each men’s (three sprints) and women’s (two sprints) races (held approximately every 15 minutes). The first five individuals across the line at each sprint, as well as at the end of the race, will earn points in ascending order of 5, 4, 3, 2 and 1. The rider that accumulates the most points overall across the three rounds will win the Sprints Competition.

There will be a fastest lap competition at each race of the Series, awarded to the rider recording the fastest individual lap of that round – including the final lap.


BE THE FIRST TO KNOW