A Year For The Books: Amelia Rose Watkinson's 2020 Season

A Year For The Books:
Amelia Rose Watkinson

Amelia Rose Watkinson has officially established her name as a force to be reckoned with after this 2020 season. There isn't one part of our lives that hasn’t changed due to the pandemic and for professional athletes, with their a main source of income coming from race wins, it's been especially tough. Amelia was very open about her struggles as a pro these last few months in interviews and on her own personal social media, even admitting she contemplated quitting the sport. Fortunately, she did not and 2020 has turned into Amelia's best season thus far.

When all large mass participation events, including sanctioned races, came to a halt in early March, athletes around the world were unsure of when racing would kick back up and what their futures might hold. After settling into a solid routine and adjusting to lockdown regulations, Amelia kept her eye on competing and qualifying for the PTO Championships race that was rescheduled for December 2020. With eight months until that point and unsure of what the rest of 2020 would look like, Amelia went straight to work banking in hundreds of hours on the turbo, racing within Zwift & Ironman VR, hitting the pool with her club The Hills District, and when appropriate, getting out for training sessions in the Aussie Outback. Amelia's focus and mental toughness seemed to be faring better than most in the madness that was 2020.

It wasn't until August that Australia officially gave the greenlight to have the Sunshine Coast 70.3 take place in September. This being the first major triathlon to take place in 2020, all eyes were on the Sunny Coast to see the best Australian athletes (and a few international athletes already in the country) duke it out for the top prize. With a stacked starting field, it wasn't going to be a walk in the park but after the top three athletes came out of the water, it was easy to see how the day would go.

After a great swim, Amelia came out of the water in third place with many pre-race favorites almost two minutes back. Early in the 90km bike leg, Amelia had taken control of the race. There wasn't much time separating the top five athletes, but Amelia was holding onto a comfortable 90-second lead after the bike and powerfully held that lead the entire run to claim the top podium spot! After writing on own blog a few weeks earlier that she had contemplated retiring from the sport, it was becoming apparent that this 2020 season was starting to turn in Amelia's favor.

A mere two weeks after Amelia's victory at 70.3 Sunshine Coast, she was already lining up for another race. This time, a full distance Ironman event. This was her second attempt at the full distance Ironman distance, with the first attempting resulting in a fourth place finish at IM Frankfurt in 2019. After frequently teasing that full distance athletes are slow, Amelia jumped with both feet into the full IM world since it was the only race taking place and had a Kona World Championship slot on the line.

Amelia took the early lead this time around coming out of the water first with triathlon legends Sarah Crowley and Renee Kiley following shortly behind. Those three held onto the race lead until the final 20km where Crowley let loose and gained a solid 5 minutes on Amelia and Renee. This didn't worry the pair too much as Sarah earned a penalty but meant that she had a few minutes to rest the legs while Amelia & Renee were fresh off the bike. The three hit the run at about the same time with Sarah gaining an early two minutes lead, but Amelia kept on with a composed and powerful stride. With 7 km left in the run, Amelia overtook Sarah Crowley. Renee gained time throughout the final kilometers, but it was not enough to overtake Amelia. Amelia, in her second attempt at a full IM distance stormed to victory and claimed not only the win at the IM Asia Pacific Championships but also securing a slot to race at the coveted Kona IM World Championships in 2021! 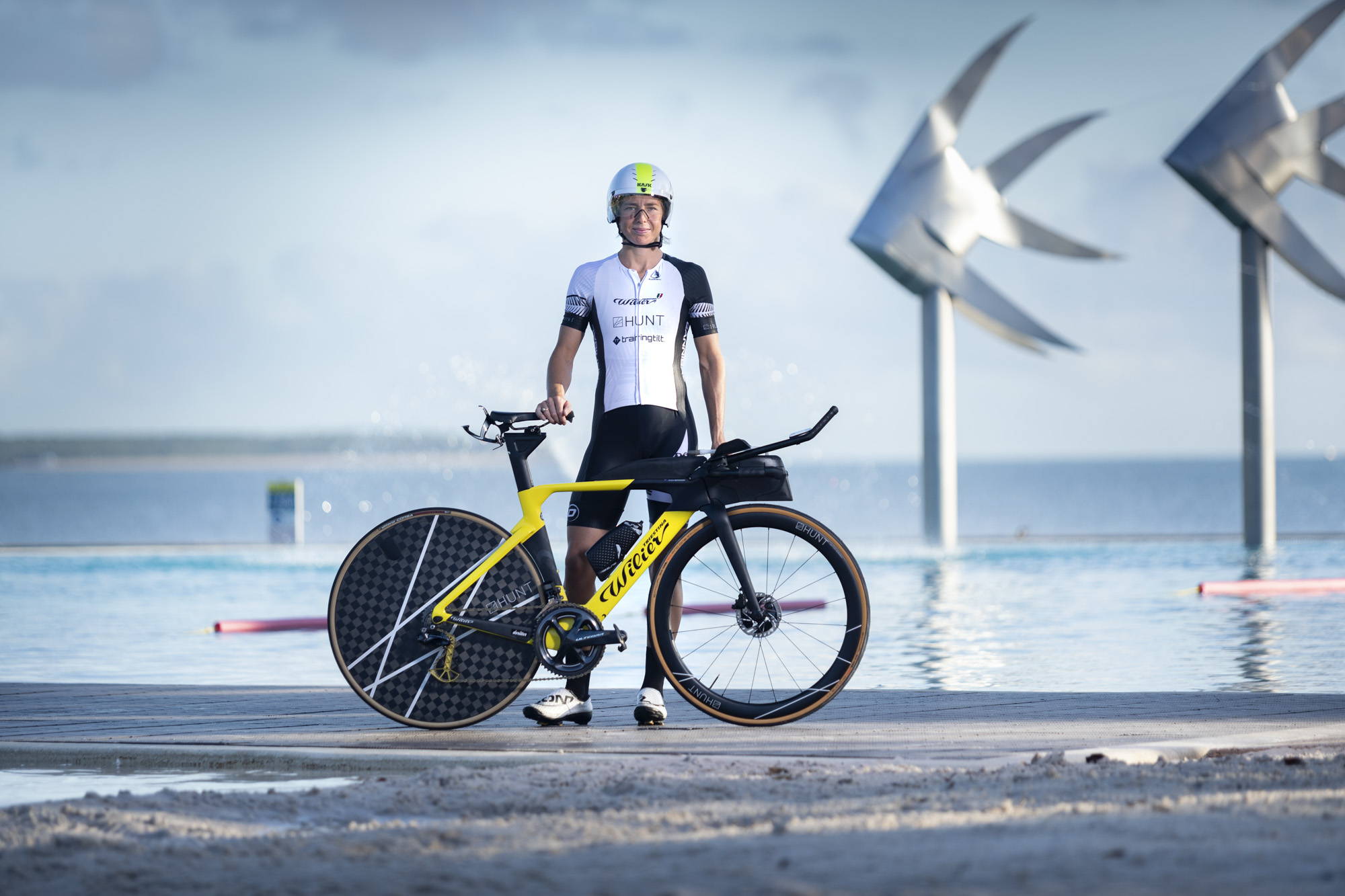 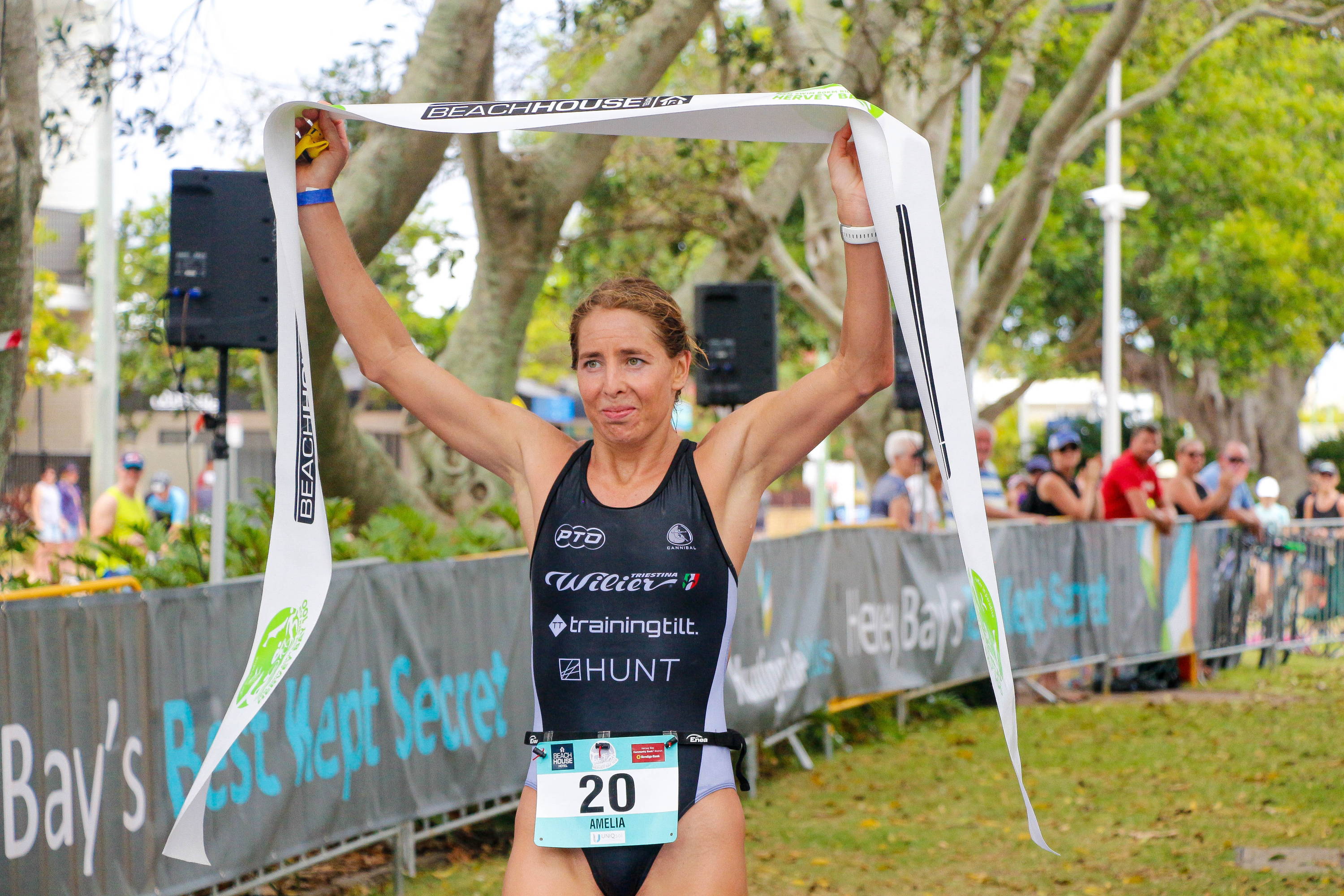 With a strong build up to the end of the 2020 race season and the PTO Championships, Amelia went into the event ranked 17th in the world. After her commanding performances in this strange year, the team HUNT were beyond proud of all that Amelia had accomplished to date. However, in true Watkinson form, she just couldn't stop there.

With most of the World's top professional triathletes all in one place, the PTO Championships were able to give viewers the captivating and suspenseful race they'd been so eagerly waiting for. With the World's top ITU & Long Distance athletes all in one place, it was interesting to see the dynamic play out over the day. With a fair bit of strong swimmers lining up that morning, Amelia comfortably positioned herself in the upper half of the second group of swimmers and stayed there until jumping out of the water and onto the bike. The 20-lap, 80km course provided a clear advantage to those who were more well suited to spending long hours in their TT positions. Entering the bike course in 16th place, Amelia slowly but surely began chipping away at the top ladies. After just under two hours, Amelia had ridden herself up five slots to land her just outside the top 10.

Knowing that she's quite fast on her feet, the HUNT team were biting our nails watching all the top athletes leave everything out on the race course. Slowly but surely, Amelia climbed the ranks, cracking the top 10 and then 9th, 8th, 7th, 6th... The coverage panned over to the winner who had just finished, leaving us at the edge of our seats to see what place Amelia would come in at. Finally, there she was; Amelia Watkinson had run into 5th place!

It was in that moment that Amelia's motto,"Don't be afraid to give up on the good and go for great," rang true for all her fans at HUNT. Amelia, after considering retirement from triathlon just a few months ago, had just proved to everyone, but most importantly to herself, that she deserved to be at the top of sport and to be taken as a serious threat for years to come.